I first visited the Mill complex in 2013 when it was already obsolete and filled with many derelict spaces. I came to the Mill with no preconceptions of the place as I have no historical affinity to it, at least not in a direct way. However, as someone living in Yorkshire, I do have a sense of the textile history of the area, especially as the landscape is strewn with its industrial remains, regularly referred to as those “dark satanic mills”, a phrase re-attributed from William Blake’s classic poem ‘Jerusalem’ and now seen as synonymous with our Industrial heritage. This aspect of our social and industrial history creates an ingrained  preconception, which can automatically feed into and “inform” or “influence” our view, on a superficial level, of the remaindered spaces of places such as Sunnybank Mills.

So it is not quite true to say that I came with no preconceptions, and my impression first and foremost was of an industrial ruin. During my residency so far I have attempted to throw off some of this baggage. I have specifically tried to avoid the social history of the site and it’s still strong community connections as I want my response to be a material reaction to the spaces and objects in and around the site as it is now. That is, a space in transition, no longer serving its original purpose and seeking a new one, though still inextricably tied to its industrial identity. Obviously what I am writing here is full of contradictions because, of course I cannot simply ignore the history of this place, and it will almost certainly inform what I see. But I do want to try to avoid the creep of nostalgia and any references to the word “heritage”!

Perhaps part of the attraction of this derelict space (and others) is the perception of it as a sort of un-curated museum. Here there are just the spaces, with no directions or labels to guide your way and nothing to create a “context” for you. The Mill as it stands now could be seen as a rootless set of spaces, disrupted and without direction. The objects within are losing their original meaning and purpose and are rapidly becoming pieces of fragmented clutter.

Somewhere like Sunnybank Mill has many histories and indeed it’s transitory position today is part of that. So a visitor to the site now has the ability to construct their own stories. Those who see it, walk though it, curate their own visit dependent on their personal history, and in its current condition, it is great fuel for the imagination! 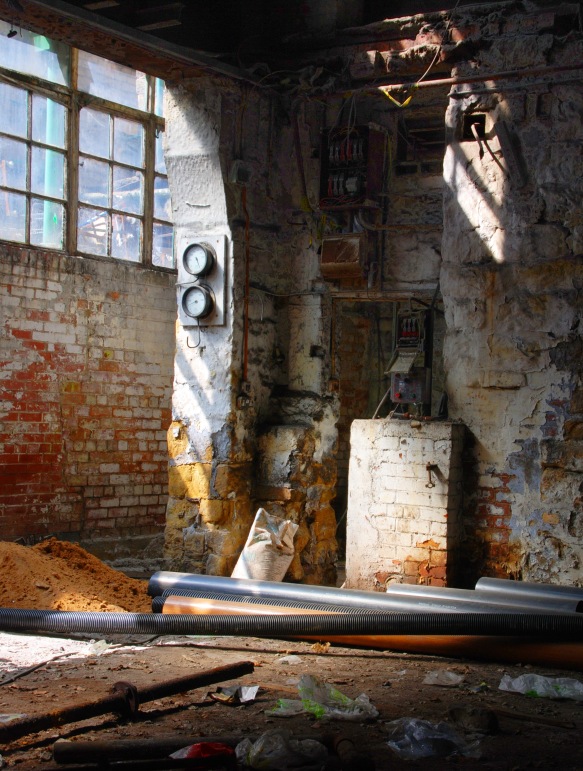