An On-site Installation at Sunnybank Mills

I’ve been based at Sunnybank Mills now for around 4 years and in that time I have documented the gradual deterioration of its derelict spaces whilst watching other areas of the site become transformed through renovation and conversion into new uses. The contrast between the two types of spaces is becoming more stark with time and the ultimate demise of two of the main areas, The Weaving Shed and the Finishing Room is now on the horizon. September’s Heritage Open Day was the last one to include these buildings, next September they will be gone.

The Scouring Shed – due for demolition this summer

We can get sentimental about our Industrial Heritage, but for many chancing upon these spaces, if left to neglect, would soon be seen as blights on the area and unwelcome “eyesores” as they most certainly do not fit into your standard historic ruin category. This Mill complex sits right at the centre of the Farsley community. At its height it was the chief employer for this small town. But times change, the world moves on…

As a human species on this planet, we don’t just exist in our environment, we mould it, re-form it and make it. We construct buildings to inhabit and shelter us and create cities and machines, to serve our needs both physically and socially. Most would accept that it is part of the human condition to make things for our comfort and pleasure. We are natural creatives. But what we make we also discard. We progress so fast that the things around us quickly become obsolescent, from whole industries, which either disappear altogether or get shifted to other countries, to day to day objects, which simply go out of fashion or become “superseded” by the next new thing. The first I-phone was released in 2007. We are now around 8 models later and the first is not only obsolete but is not supported by todays software technology so even if it still works, it can’t access much of the media that is now out there.

So the flip side to our huge creative brain is the trail of cast offs we leave in our wake. We live in a mass consumerist and throw away society and whilst we all talk of sustainability and the need to re-cycle, very little of our everyday life actually engages with this. As super creative beings we should be directing all our creative endeavours into this aspect of the human condition.

We have programmes on tv that explore re-cycling “old junk”. Upcycling is a great new trend as is Vintage where second-hand becomes high fashion. We value our old ruins as a nostalgic relic of the past and that un-making process (or is it a re-making?) of decay has been a sport of the Romantic Movement in one form or another, for centuries. Today “Urban Explorers” break into derelict spaces and post up great photos of nostalgic presence. But ultimately they are documenting the cast offs.

In my time at Sunnybank Mills, much of this has pre-occupied me. I have looked at the decaying structures and was initially pre-occupied with documenting and re-portraying it, in a not dissimilar way to the “Urban Explorer”.  But as I have spent more time in these areas, I have thought more about what that word decay actually means. Through the human eye it is viewed from a solely human perspective. That is, what use is something unless it benefits us? This is something that always strikes me about us as a species. We have a very binary way of looking at things.

But that “decaying”process is merely a transformation into something else. It might not be into anything we see as purposeful but in a universal sense it is a dynamic change. The term “entropy” is a difficult one to grasp (I’ve been looking at this for years and still don’t quite get it!) but it is a physics term which relates to the Second Law of Thermodynamics. My personal interpretation of this is that it is in the nature of our system, that the molecular structures that make up an object, are in a constant state of flux as they endeavour to form their simplest state and as such everything is continuously changing . We view this as ageing or decay but from an abstract viewpoint it is simply change. It is a constant state of re-making and un-making.

Pushing aside all those thoughts of mortality, which inevitably pop up, (the human binary perspective again) if you look at this in a creative way then the opportunities are endless and there is some real fun to be had playing with this idea!! The weaving shed becomes an adventure playground and the graffiti gallery is seen as a typical transition for this space…..but it is creative, expressive and transforming.

My own explorations were concerned with a more tentative investigation of both the perception and physical re-making of the space and some of its contents. In my last exhibition I started to explore some of the objects, making casts to see how they might be re-viewed. These I have since brought back into the derelict Weaving Shed where their originals came from. 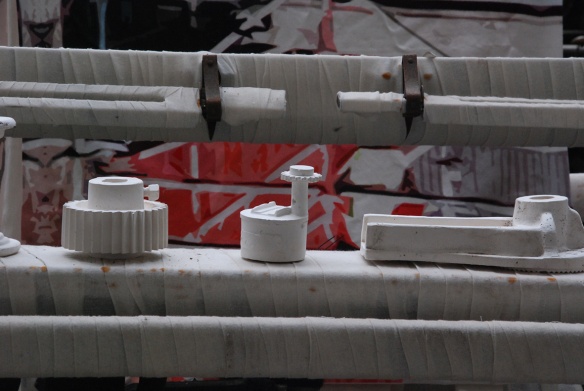 Castings of the loom parts re-introduced back into the derelict Weaving Shed.

This made me think of the originals and how they might be re-made and reimagined into something which might re-contextualise the objects and their original purpose (now obsolete) With permission from the owners, I collected a number of these old machine parts and had them re-coated in a range of bright colours. 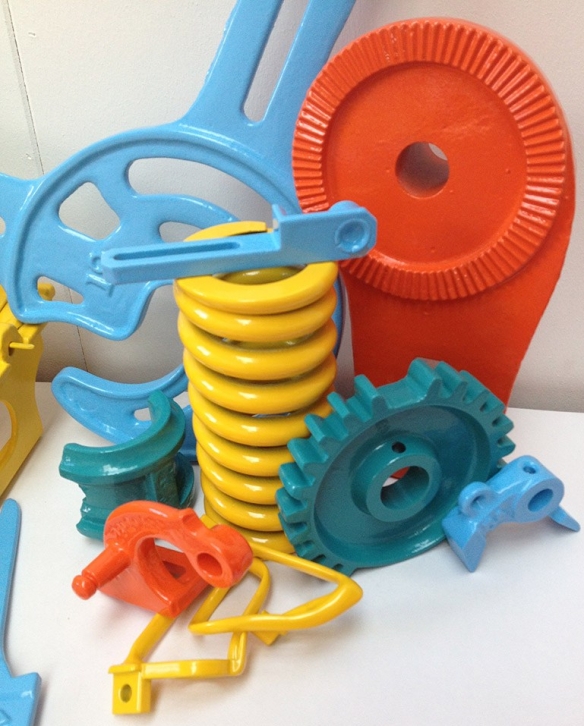 They became instantly toy like and had a lovely tactile quality which made them so accessible to play with. Arranging and displaying them became a major pre-occupation – like building with meccano! I sat and made a series of gouache paintings based on them, just because the shapes took on a whole new interest for me. 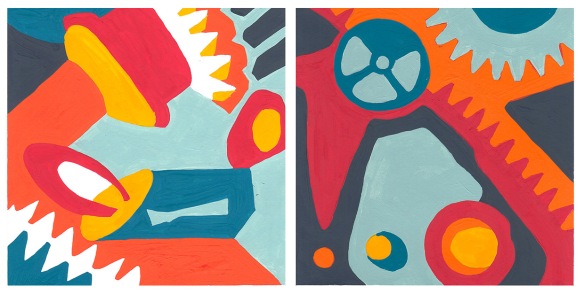 Gouache paintings based on the machine parts

All of this was happening in my studio, somewhat distant to the space they came from.

Regular re-visits to the Weaving Shed were mainly concerned with recording what I saw, either through photography or drawing and then playing with this imagery (as above) and I had resisted interactivity in the space as I felt this might change or interfere with the nature of that space. However over one of the summer’s a series of “graffiti events” made me re-think this. Additionally, collecting the machine parts and re-making them, enabled a different kind of engagement with the objects and by inference the space as well. These spaces aren’t just there to be derelict they are spaces in transition and as such anything goes really. This was very liberating and I started to think of it as a sort of adventure playground, viewing the place in a very different way.

The loom was my first choice of interactivity. I suppose as this was an object within the weaving shed rather than the space itself, it didn’t seem quite as intrusive (why do I use this word?)

Wrapping the loom in cotton muslin

This gave me time in the shed to be occupied doing something and thus spending more time in the space itself. It is very quiet in there! There is no industrial activity and noise, which would have been deafening when all the looms were at full tilt. There is now the occasional flutter of a pigeon and odd creaks….but otherwise silence. Wrapping the loom might seem an odd way to engage but it was slow and methodical …and careful and enabled me to engage with both machine and space in a more contemplative way. It also made me consider the space as something which was still dynamic and changing. I decided to bring the work which had been inspired by the space, back into the space so that the two, the subject and product could be introduced to one another!

The embroidered textiles are printed with care, meticulously stitched and pressed and kept clean and crisp….the antithesis of the space within which they sit. And yet the two sparked off a conversation with each other and I hope encourage the viewer to engage with the space in a more enquiring way. 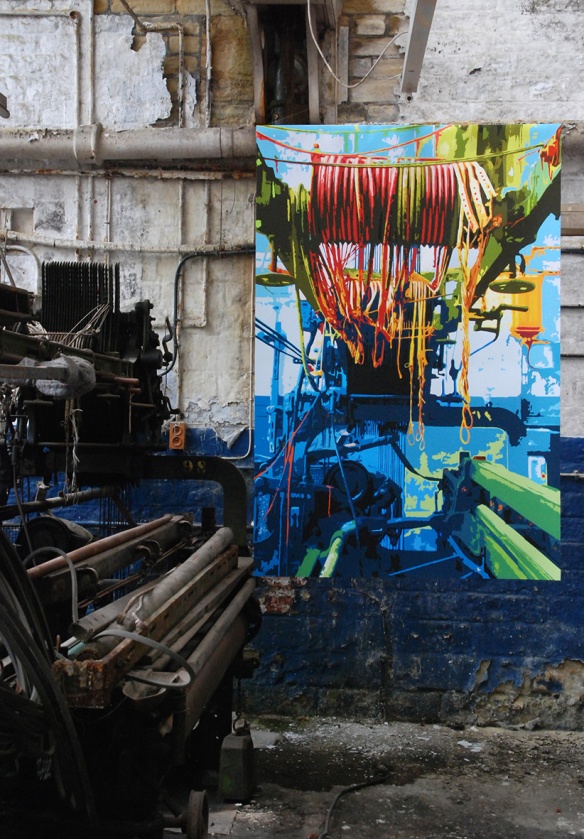 The Loom with its partner piece

The gouache paintings made wallpaper backings to the shelving which housed the machine parts.

Both cast objects and the re-coated machine parts were brought back into the space from which they came and were used to re-dress the old shelving they had come from. My painted compositions based on those machine parts were also used to “dress up” the shelves. I wanted people to see this stuff as something which had exciting potential….and to re-contextualise it all, away from its original purpose.

I first visited the Mill complex in 2013 when it was already obsolete and filled with many derelict spaces. I came to the Mill with no preconceptions of the place as I have no historical affinity to it, at least not in a direct way. However, as someone living in Yorkshire, I do have a sense of the textile history of the area, especially as the landscape is strewn with its industrial remains, regularly referred to as those “dark satanic mills”, a phrase re-attributed from William Blake’s classic poem ‘Jerusalem’ and now seen as synonymous with our Industrial heritage. This aspect of our social and industrial history creates an ingrained  preconception, which can automatically feed into and “inform” or “influence” our view, on a superficial level, of the remaindered spaces of places such as Sunnybank Mills.

So it is not quite true to say that I came with no preconceptions, and my impression first and foremost was of an industrial ruin. During my residency so far I have attempted to throw off some of this baggage. I have specifically tried to avoid the social history of the site and it’s still strong community connections as I want my response to be a material reaction to the spaces and objects in and around the site as it is now. That is, a space in transition, no longer serving its original purpose and seeking a new one, though still inextricably tied to its industrial identity. Obviously what I am writing here is full of contradictions because, of course I cannot simply ignore the history of this place, and it will almost certainly inform what I see. But I do want to try to avoid the creep of nostalgia and any references to the word “heritage”!

Perhaps part of the attraction of this derelict space (and others) is the perception of it as a sort of un-curated museum. Here there are just the spaces, with no directions or labels to guide your way and nothing to create a “context” for you. The Mill as it stands now could be seen as a rootless set of spaces, disrupted and without direction. The objects within are losing their original meaning and purpose and are rapidly becoming pieces of fragmented clutter.

Somewhere like Sunnybank Mill has many histories and indeed it’s transitory position today is part of that. So a visitor to the site now has the ability to construct their own stories. Those who see it, walk though it, curate their own visit dependent on their personal history, and in its current condition, it is great fuel for the imagination! 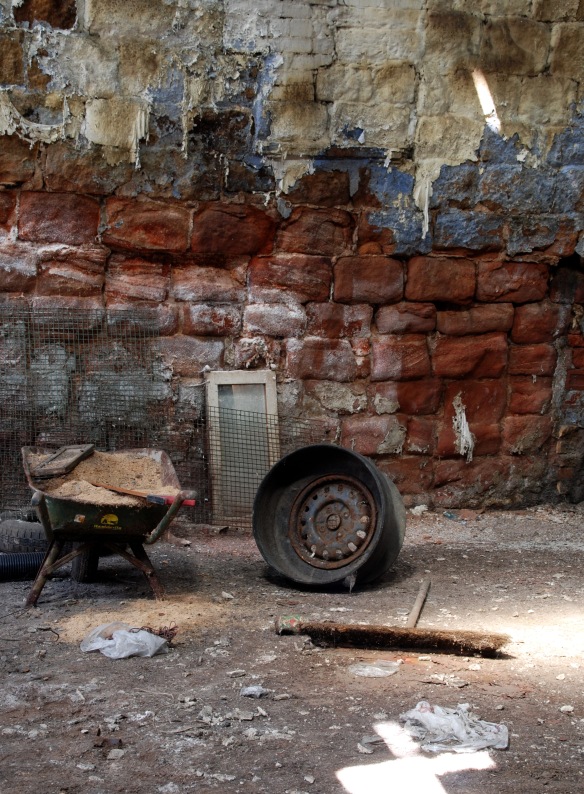